You are here: Home » Uncategorized » The Little Neutral One

The Little Neutral One

A century ago was a heady time to be a physicist – new phenomena, new particles, new laws of nature, and more were being discovered, it seemed, daily as physicists appeared to be determined to refute an earlier contention that “the future truths of physical science are to be looked for in the sixth place of decimals.” And, of course, every discovery brought with it additional questions to be answered – but for a few decades, one of the most significant of these questions involved beta radiation. To explain why, though, we need to back up a little bit and get into some of the background.

One of the bedrock principles of physics is the conservation of energy – often stated along the lines of “Energy is neither created nor destroyed, but only changes in form.” We see this in a pendulum – at the top of its arc (maximum potential energy) the pendulum is momentarily motionless (zero kinetic energy); as it begins its downward swing it loses potential energy (it’s closer to the ground) but gains kinetic energy (it’s moving faster). If we add the potential and kinetic energies at any point in the pendulum’s cycle the sum will be the same – the total energy is the same at all times. 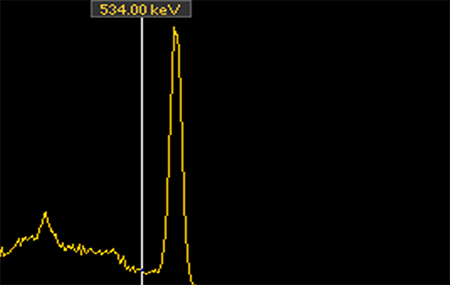 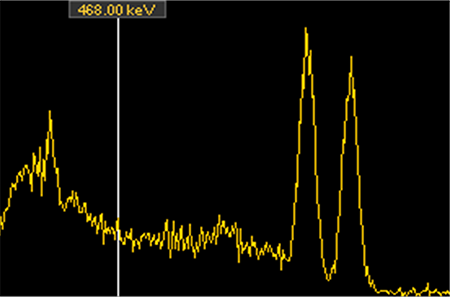 Two spectra I collected, Cs-137 on the top and Co-60 on the bottom. Note the distinct peaks that are unique to each of these radionuclides.

Conservation of energy works at the atomic level as well. A radioactive atom has a specific amount of energy contained within, as does the atom to which it decays. Thus, every radioactive decay involves an atom losing a very specific amount of energy – energy that goes into the radiation the atom has just emitted. So when early researchers analyzed the energy of the alpha and gamma radiation given off by the radioactive atoms they were studying they were pleased to note that the radiation had distinct energies – so distinct, in fact, that they are used to identify the radionuclides that emitted them. If I see gamma radiation with 662,000 electron volts (abbreviated as 662 keV) I know there is Cs-137 in the area; 1460 keV is the signature of potassium (specifically, the naturally radioactive isotope K-40), and so forth. Alpha radiation is the same – an alpha with 4871keV of energy was almost certainly emitted by a Ra-226 atom.

So imagine the surprise of physicists a century ago when they realized that beta decays have a continuous spectrum and not the sharp peaks they expected to see. This left them in a quandary. One possibility was that that conservation of energy was not as rigid a rule as physicists thought – perhaps it was only accurate when averaged across a large number of atoms, but not with every individual atom; that was the suggestion of the great Niels Bohr. Or, as suggested by another great physicist, Wolfgang Pauli, maybe beta decays were associated with the ghost of a particle that we just couldn’t find a way to detect – that, together, both particles contained the total energy difference between parent and progeny, divvying it up between them and conserving energy.

Bohr, a future Nobel laureate (as was Pauli), was highly respected and any suggestions he made had to be taken seriously. On the other hand, the thought that energy might not be conserved in every single interaction – that some radioactive decays might simply involve more or less energy than other identical decays – was anathema. But by 1934, as beta spectra became more accurately determined, physicists noticed that they were unique to each beta emitter – they did not behave the way that Bohr’s hypothesis required. It turned out to be easier to believe in a ghost particle that we hadn’t yet learned to detect than to believe that the conservation of energy might sometimes be violated. So, however reluctantly, physicists began to try to puzzle out what this particle might be like. 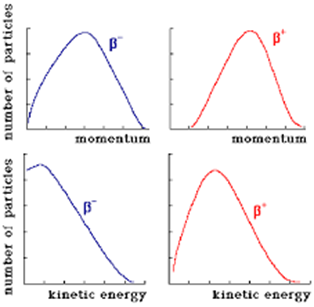 Beta energy spectra – note that, unlike the earlier gamma spectrum, there is no peak energy. Source: https://ocw.mit.edu/courses/nuclear-engineering/22-02-introduction-to-applied-nuclear-physics-spring-2012/lecture-notes/MIT22_02S12_lec_ch1.pdf

One thing seemed likely – since it was invisible to all of the detectors of the day it likely had no electrical charge; it was likely electrically neutral. For this reason, Pauli suggested naming it a neutron (following the convention set by the names electron and proton). The problem was that, around the same time, British physicist James Chadwick wanted to use “neutron” to name the heavy neutral particle in the atomic nucleus he’d just discovered. To resolve this small impasse, Italian physicist Edoardo Amaldi joked that they should name Pauli’s smaller particle “neutrino,” the “-ino” an Italian diminutive making the word mean “little neutral one” (in comparison to Chadwick’s much larger particle). The name was adopted – now physicists just had to find the thing. And that raised an interesting question – how do you find a particle that doesn’t want to interact with your detectors?

Consider ionizing radiation for example. Gas-filled detectors work because incoming radiation slams into an atom and strips off an electron; this sets into motion the process of gas amplification that leads to a pulse of electrons passing through an electrical circuit that includes an analyzer capable of extracting information about the radiation. Or a scintillation detector, in which the radiation interacts with the detector medium (usually a crystal, but sometimes liquid or plastic) – this interaction deposits energy into the scintillator and leads to the emission of photons that, passing through a photomultiplier tube, produce a signal that can be amplified and studied. In fact, even our eyes work this way with non-ionizing radiation (light) – the photons interact with the rods and cones of our retinas which lets them be detected, sending signals to our brains. But something that doesn’t seem to interact with anything? That’s a bit more difficult.

In 1942, Chinese physicist Wang Ganchang suggested that, since neutrinos are emitted along with beta particles (which are electrons ejected from the nuclei of unstable atoms), perhaps they could be detected by looking for evidence of neutrinos interacting with beta particles during a form of radioactive decay called beta capture. Fourteen years later a team of American physicists announced their detection of neutrinos in the journal Science, earning the 1995 Nobel Prize for their achievement.

We’ve learned a lot in the decades since neutrinos were first confirmed to exist, and the ghostly little particles turn out to give us some huge insights about the universe – in fact, for some time it was thought that the fate of the universe hinged on whether neutrinos weighed nothing…or almost nothing. Neutrino observations from the Sun have raised questions about the inner workings of the solar furnace and, in 1986, a burst of neutrinos that appeared in the world’s neutrino telescopes were associated with a supernova in a satellite galaxy to our own Milky Way. In fact, some astrophysicists have even suggested (erroneously – https://what-if.xkcd.com/73/) that neutrinos from gamma ray bursts and supernovae might even be responsible for mass extinctions throughout the galaxy. We’ve also discovered that there is an entire family of neutrinos out there, associated with not only beta particles (electrons), but also with the more exotic tau particles and muons – along with their respective anti-neutrinos. These are all still quite ghostly – but they are no longer invisible or unknown…and they’re fascinating. 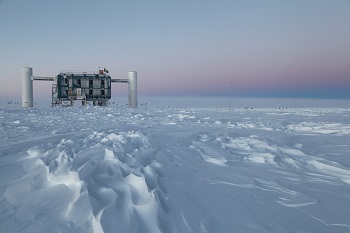 A neutrino observatory in Antarctica. Neutrinos are so elusive that they pass completely through the Earth before they’re detected here. Source: https://research.msu.edu/23m-nsf-grant-funds-to-upgrade-antarctic-icecube-neutrino-observatory/