What does it mean when a nuclear reactor goes critical?

Dear Dr. Zoomie – I was watching a movie the other day and everyone was upset that the reactor was going critical. What’s this mean? How does a reactor go critical, and how dangerous is it really?

The word “critical” certainly sounds bad, but it’s not as dangerous as you might think. Physicists use the term “critical” all the time – as one example, if you shine a light at a piece of glass it will pass through it up to a point – once you reach a certain angle the light will reflect off the glass. This angle is called the critical angle and, among other things, it helps light to reflect endlessly along fiber optic lines. But I digress…in the case of nuclear reactors, “criticality” simply means that the reactor is in a configuration that will let it operate at a steady power level. It’s a term developed by physicists during the Second World War and it just stuck around as reactors went from being scientific demonstrations to a mainstream source of power. Here’s how it works.

When a uranium atom is hit by a neutron (a slow-moving neutron) it can split apart – this is the fission process. It splits into two smaller atoms (called fission products) and it also emits a few neutrons. A neutron might escape the reactor entirely, it might be absorbed by metal in the reactor machinery (or by anything that’s not another uranium atom), it can be absorbed by a control rod (more on these later) or it might be absorbed by another uranium atom, causing another fission. To keep reactor power steady we need to have one of these neutrons to cause another fission. When that happens – when the reactor is in a configuration such that one neutron from each atom fissioned causes another fission – the reactor is said to be “critical.” So to a reactor operator, “criticality” is what they’re shooting for and it’s certainly nothing to be feared. A military reactor I was assigned to was once critical for low-power physics testing and was making about enough energy to heat up a cup of coffee. 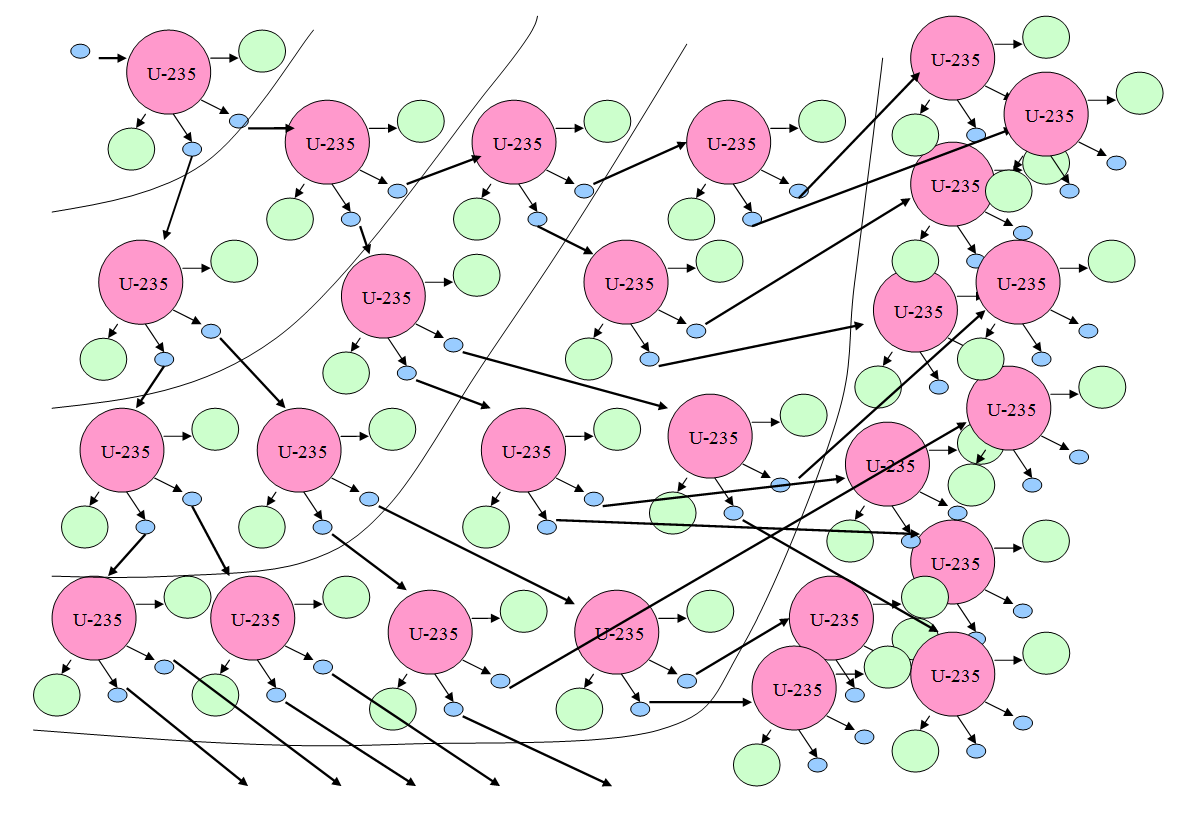 I mentioned earlier that slow neutrons are most effective at causing fissions. So say (to pick a number) a neutron travels 5 inches before it can cause another fission – the fuel has to be at least 10 inches in diameter to be large enough that most of the neutrons are likely to run into another uranium atom before they escape from the fuel (it’s actually a little larger, but you get the idea). With a density that’s nearly 20 times that of water, a ball of uranium that’s 10 inches in diameter weighs about 380 pounds – this is the mass of uranium required to achieve criticality – the critical mass. Incidentally, this is NOT the actual number – just made up to illustrate the point. The real number will vary depending on the enrichment of the uranium (e.g. natural uranium, reactor-grade, or weapons-grade) and a number of other factors.

There’s another factor – neutrons from fission move very quickly and they have to be slowed down; they slow down by bouncing off of hydrogen atoms in the water that keeps the reactor cool. So this means that our reactor core has to space out the uranium with water in between the rods of uranium to give the neutrons water to pass through (this process is called “moderation”). This adds even more to the size of the reactor core, as well as calling for even more uranium since the core has grown.

Simple diagram of how nuclear power is generated. Click the image to see an enlarged view.

Yet another thing to consider is that we want our reactor to be able to operate for awhile before we have to add more uranium to make up for what has fissioned – any reactor that has exactly the minimum critical mass will be able to operate only once (just as we build a fire with more than just a single match). So it’s necessary to have still more uranium to keep the reactor running for months or years.