How is Radiation Detected and Measured?

Dear Dr. Zoomie, how is radiation detected and measured?

Great question – and very important. Since we can’t sense radiation ourselves, our instruments are the only things that make it possible for us to know if we’ve got potential problems. In fact, you can be in a dangerously high radiation area and still have no way of telling you’re at risk unless you have radiation instruments.

OK – so we need our instruments, but you can’t just go out and buy the first radiation detector you see. There are a bunch of different types of radiation instruments – some measure radiation, some measure contamination, some are specialized to detect only one type of radiation, and some are designed to identify exactly what kind of radioactive materials you’ve found. So let’s talk a little bit about each of these.

If you’re trying to keep yourself safe – to keep from getting radiation sickness for example – you’ll be interested in measuring radiation dose rates. These are measured in units of mR/hr (in the US) or mGy/hr (in the rest of the world).

Once we get past the different types of measurements (dose rate and contamination levels – or count rate) we have to contend with the fact that there are four different kinds of radiation; alpha, beta, gamma, and neutron. Each one of these has different properties and each of them is measured somewhat differently. This isn’t the place to get into each of the types of radiation, although that might be a good topic for a later posting. Rather than going into a long discussion of each type of radiation detector it might be easier to summarize them in a table.

Sodium iodide (NaI) probe for gamma contamination and radiation surveys.  This should be used for contamination surveys unless it is attached to a meter that has been calibrated to measure in radiation levels (this information should be noted on the instrument calibration records.  Record results in CPM. 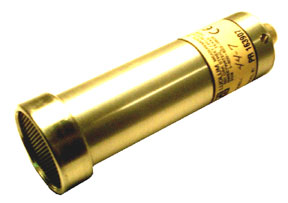 Geiger-Mueller (GM) “hot dog” probe for beta and gamma contamination surveys.  This may be used for measuring radiation levels only if the meter was calibrated for the isotope (e.g. Cs-137) present.  Record results in cpm.

Zinc sulfide (ZnS) alpha scintillation probe.  The window on this probe is exceptionally fragile and must be protected from accidental puncture.  Record results in cpm. 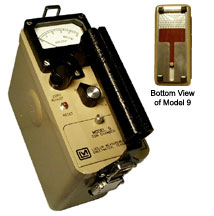