Should I Be Concerned About Japan Dumping Tritium from the Fukushima Plant?

Thursday, April 14, 2016 Comments Off on Should I Be Concerned About Japan Dumping Tritium from the Fukushima Plant? by Dr. Zoomie

Dear Dr. Zoomie – What is it about the tritium they’ve got stored up at Fukushima? I heard this is something that they’re going to just dump into the ocean – is this something I should worry about? Do I have to give up on sushi for the next ten years? And where does the tritium come from, anyways?

There are a couple of questions here – let’s start with the most fundamental one first: where does tritium come from.

Tritium is a radioactive form of hydrogen. Normal hydrogen is the most common element in the universe – over 70% of the atoms in the universe are hydrogen atoms. This hydrogen is mostly the simplest atom of all – a single proton mated with a single electron. But elements come in different “flavors” – you can add a neutron to an atom of any element without changing it into a different element. So we can add a neutron to hydrogen to form a new atom – one with a proton, an electron, and a neutron – that’s a heavier form of hydrogen that’s called deuterium. 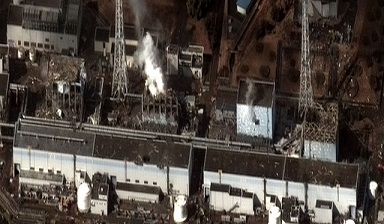 The Fukushima I Nuclear Power Plant after the 2011 Tōhoku earthquake and tsunami. Reactor 1 to 4 from right to left.

You can take this a step further and add yet another neutron to our deuterium atom to produce something that still has a single proton and electron, but that now has two neutrons – this is called tritium, and tritium is also slightly radioactive. Of course, to do this we have to find a source of neutrons – in a nuclear reactor those are produced in copious quantities by the nuclear fission that’s taking place. So this is where the tritium comes from – hydrogen atoms in the water absorb neutrons from nuclear fission to form radioactive tritium in the reactor coolant.

Tritium is also produced in the atmosphere, by the way, in a natural process that’s been happening since the Earth first formed. When cosmic radiation strikes atoms in the atmosphere it can break up some of these atoms; some of the time these fragments will include tritium atoms. This has been measured for decades and the rate of tritium formation is well-known. In fact, at any time, there’s just a tad less than 1019 Bq of tritium from natural sources in the environment. Oh – the Bq (Becquerel) is a measure of radioactivity (one Bq of activity will give you 1 radioactive decay every second). We’ll get back to this shortly.

Tritium atoms are still atoms of hydrogen and they behave the same as any hydrogen atom, so the tritium remains part of the water molecules. From a radiological standpoint, tritium has a half-life of about 12.27 years, which means it doesn’t decay away very quickly at all and will be with us for awhile. On the other hand, it only gives off a low-energy beta particle – so low-energy that it’s almost impossible to detect without specialized radiation equipment. This means that tritium is hard to detect – it also means that it’s not very dangerous (more on this shortly).

So – reactor coolant is water that circulates through the reactor where it’s exposed to neutrons. Some of these neutrons are absorbed by hydrogen – and then by deuterium – atoms to form tritium. This means that the water that comes out of an operating nuclear reactor is going to contain tritium – it also means that tritium formation stops when the reactor shuts down since the neutrons are produced from fission, which stops when the reactor shuts down. Thus, the only tritium present is whatever was in the reactor coolant of the three operating reactors at the time the reactors shut down. As we all know, there have been leaks of this coolant into the sea and into the local groundwater which means that tritium has been entering the environment in both of these places. The tritium that’s already entered the ocean can’t be recovered; the tritium in the groundwater is another story – the Japanese have been recovering contaminated groundwater for a few years, including the tritium it contains, and they have to do something with it.

It’s important to remember that tritium is chemically identical to regular hydrogen. This means that tritiated water can’t be chemically processed to remove the tritium. And, since the tritium is part of the water, it also means that the tritium can’t be filtered out. In fact, there’s really only one effective way to remove tritium from the normal hydrogen in water – distillation. Since tritium is heavier than normal hydrogen (because of those two extra neutrons), tritiated water is about 10% heavier than regular water; this means that it evaporates a little more slowly, so repeated distillations will gradually strip off the lighter water, concentrating the tritiated water in what remains. The problem is that this process is slow and expensive – it doesn’t always make sense to go this route.

OK – so the Japanese have tons of water that holds – according to the news article you referenced – about 3.4×1015 Bq (over 90,000 curies) of tritium. This is a lot of tritium to have in one place – but it’s not even close to the nearly 1019 Bq of tritium that’s already in the oceans from natural sources. In fact, there’s about 3000 times as much tritium in the environment from natural sources as there is contained in all of the water tanks at the Fukushima site. This is important for a couple of reasons – first, because it means that tritium is a part of the natural environment and, second, because it means that the tritium held at the Fukushima site is (almost literally) a drop in the bucket compared to natural tritium. So it seems reasonable to conclude that, even if this water is dumped into the ocean, it won’t be enough to cause massive health or environmental problems.

The problem is a little more complex than that of course. For example, natural tritium is distributed throughout all of the oceans, the atmosphere, and even within the bodies of every organism on Earth. On the other hand, the tritium from the Fukushima water will be discharged into a small part of the Pacific Ocean – it’s likely that the local concentrations will be higher than natural tritium concentrations. This is true – but we have to remember that it’s a BIG ocean and the tritium will diffuse into it and will mix fairly quickly. And the organisms that are exposed to it are going to change out the tritium the same as we do (more on that in a moment) – over the space of a few weeks or (at most) months the tritium will pass out of their bodies.

When tritium is in the body it pretty much circulates with all the other hydrogen – it sticks to the body’s fluids. This means that, instead of targeting a specific organ (iodine, for example, concentrates in the thyroid gland) tritium affects the whole body. This sounds bad but, in fact, it means that the entire body gets a low dose of radiation rather than one particular organ receiving a high radiation dose. The other factor is that we are constantly changing out the water in our bodies as we drink, breathe, sweat, and urinate – this means that the tritium in the body tends to leave fairly quickly; and the more we drink, the faster it leaves. So if you do have an uptake of tritium, the best thing to do is to drink plenty of fluids so you urinate out the tritium in your body and to dilute what remains. Incidentally, there’s an urban legend that the best way to do this is to drink a lot of beer…I found out recently that this originated with an offhand quip made by one of my colleagues. When I asked him about it he acknowledged inspiring the comment and said it can’t hurt – but pretty much any liquid intake will have the same effect. If you like tea, drink tea; if you like water, drink water; if you like beer, drink beer. The important thing is to drink (and urinate) – what you drink is almost incidental.

So – let’s recap a little bit.

Third, if the Japanese government does dump all of this into the environment it will probably increase tritium concentrations in the water – and probably in the organisms living in that water. But this will pass as the water mixes in with the ocean water and it will almost certainly have no long-lasting environmental impact.

Finally, tritiated water mixes in with all of our body fluids and it passes out of our bodies in the same way as the water we might have drunk after working out. To speed up this normal changeover, simply drink more fluids.