What’s the Deal with Yucca Mountain?

Tuesday, June 13, 2017 Comments Off on What’s the Deal with Yucca Mountain? by Dr. Zoomie

So, Dr. Zoomie:  what’s the deal with Yucca Mountain? 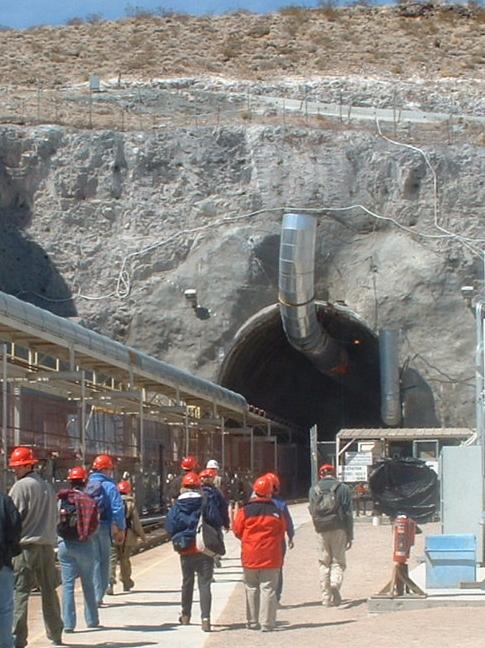 In the mid-1990s I was on a technical advisory committee to the organization that was working to find a location for a low-level radioactive waste disposal facility that was to service several states in the Midwest. Even with stringent siting criteria there were a number of locations that would have been acceptable; what stopped the process was that the Midwest Compact decided to pull the plug – changes on the national level made it more attractive to continue using existing sites than to start up a new one. At present, there are a number of sites for the disposal of low-level radioactive waste, but the nation is still struggling to answer a question that many nations have already satisfactorily addressed – where to put the nation’s high-level radioactive waste. This process has recently come up in the news again. This is an important topic – one that warrants more than a single posting – so I’d like to discuss various aspects of the science behind high-level radioactive waste disposal in general, and of Yucca Mountain in particular, over the space of a couple of postings. But first I’d like to start with an overview of where high-level radioactive waste (HLW) comes from and a little bit of history on this topic. So history this week, then we’ll get into the science.

By definition HLW is “highly radioactive material produced as a byproduct of the reactions that occur inside nuclear reactors.” It includes both spent reactor fuel (fuel removed from the reactor because it no longer has enough fissionable U-235 to easily sustain a chain reaction) and waste produced during the reprocessing of spent fuel. HLW can be hot – both thermally and radioactively – and it has to be handled with care. Not only that, but some of the nuclides remain hot for decades to millennia so it has to be kept secure for at least as long as the Pyramids have been standing. There are a lot of factors that enter into storing HLW safely – too many to go into here, but I’ll try to cover them in future postings as well.

All nuclear reactors produce HLW during their operation – a typical reactor will be refueled every year or two; during a refueling outage much of the fuel is shuffled around in the core and the remainder is removed. In other nations the spent fuel is reprocessed – plutonium that was produced during reactor operations is removed and residual fissionable U-235 can be removed as well; whatever’s left over is disposed of as HLW. Until recently plans were to dispose of HLW beneath Yucca Mountain, located in the Nevada desert, but those plans have been on hold for several years. Here’s what happened.

In 1982, realizing that the US needed a long-term plan for high-level waste, the Nuclear Waste Policy Act was enacted into law. This law tasked the Department of Energy (DOE) with developing a repository, the Environmental Protection Agency was instructed to develop environmental safety standards and to evaluate a repository’s safety, and the Nuclear Regulatory Agency was told to develop appropriate regulations. DOE started a long process that led them to Yucca Mountain. Without getting into the details, Yucca Mountain, by 1987 the DOE was beginning to investigate its suitability as a deep geologic repository and Congress approved it in 2002. Instead of solving the issue, though, this only seemed to serve as incentive to those opposed to the site – both inside and outside of Nevada. Both scientific studies and legal/political opposition continued until 2011, when Congress pulled the plug on Yucca Mountain. And there’s where the issue seemed to rest until just recently, when the issue came up yet again. At present it seems the issue isn’t settled after all – but who knows what will happen next year.

At the same time, all of our nuclear power plants are continuing to operate and to produce HLW. At first it was stored on-site in wet storage – immersed in water. As the spent fuel pools began to fill up the nuclear power plants got permission to re-rack their fuel (the spacing of the spent fuel rods is carefully controlled to prevent the possibility of a criticality). With pools continuing to fill up – and still no place to permanently take the waste – the NRC authorized dry cask storage – taking the spent fuel out of the swimming pool and putting it into land-based casks. And that’s where matters stand today – over 50 individual reactor sites are storing their HLW on site in a combination of dry casks and re-racked swimming pools.

All this being said, Yucca Mountain is hugely controversial. There’s not space here to go into all of the controversy – it gets into geology, transportation, groundwater and surface water, and more – but if there’s an interest I’ll try to cover some of the controversy in future postings.

Staying Safe in a Radiological or Nuclear Attack

Tuesday, June 13, 2017 Comments Off on Staying Safe in a Radiological or Nuclear Attack by Dr. Zoomie

Dear Dr. Zoomie: Last week a big nuclear terrorism exercise made the news, and I can’t help but wonder “What do I do if something like this happens for real? How do I keep myself and my family safe?”

I’ve been working on this, and related topics for some time and can say, first off, that most of our immediate instincts are wrong. If you can do the right thing – and do it quickly – even a nuclear attack can be survived. But in the case of a nuclear attack, it’s what you do in the first few minutes – before the first public service announcement – that will save your life. Or not. Anyhow – I can’t promise that following the steps listed here are guaranteed to save your life in the case of a nuclear attack. But I can tell you that following these steps will maximize your chance of survival. Oh – I’ll also point out that much of this (sheltering, for example) is simply sound advice for any major attack; not just radiological or nuclear, but also for chemical, biological, bombs, and even most cases of active shooters.

Finally, learn how to use the detector, learn what normal “background” radiation levels are in your area, and use the meter every now and again to make sure it’s still operating properly and to remind yourself how to use it. Otherwise you might end up with an inoperable meter, the wrong type of meter, or one you don’t know how to use. Using the wrong instrument (or the right instrument, but improperly) can be more dangerous than performing no survey at all because it can lead to a false sense of safety. And – by the way – most “Geiger counters” are NOT the right instrument to use for something like this!