The 1950s were optimistic years in the U.S. – the economy was booming, we were (more or less) at peace, and the undisputed leader of the free world; only the USSR challenged us militarily. We were optimistic in other areas as well – our scientific and technical capabilities had helped us to win WWII, especially our work on nuclear weapons, and at the time, nuclear energy was still touted as one day being “too cheap to meter.” In January 1954, National Geographic published an article titled Man’s New Servant, the Friendly Atom (https://archive.org/details/jishankhan_hotmail_1954/1954-01/page/n72/mode/2up), touting the many ways that radiological and nuclear science was going to benefit humanity – while it’s hard to picture any magazine today running such a headline, it fit the spirit of the times perfectly. Later that year the National Geographic ran another piece in the same vein – Hunting Uranium around the World (https://archive.org/details/jishankhan_hotmail_1954/1954-10/page/n95/mode/2up); it’s this piece and the sentiment behind it that’s the basis for this article.

To understand the uranium craze we have to put ourselves in the world of the era – before the environmental movement really took off, when atmospheric nuclear weapons testing was seen as a sign of national pride rather than a source of massive environmental impact, and when nuclear energy was seen as the energy source of the future. In the world that was envisioned uranium was going to take the place of oil and coal…if only we could find enough of it to power the world. And in fact, the October 1954 article was even subtitled: “Lured by Rich Rewards, Prospectors Search from Desert to Arctic for New Supplies of This Magic Fuel of the Atomic Age.” Uranium prospecting in the 1950s became a craze; according to author Catherine Caulfield, Americans purchased over 35,000 in 1953 alone. In her book Multiple Exposures, Caulfield quotes Gordon Dean, who chaired the Atomic Energy Commission in the early 19050s:

The security of the free world may depend on such a simple thing as people keeping their eyes open. Every American oilman looking for “black gold” in a foreign jungle is derelict in his duty to his country if he hasn’t at least mastered the basic information on the geology of uranium. And the same applies to every mountain climber, every big game hunter, and, for that matter, every butterfly catcher.

Uranium fever made its way into popular culture as well – I remember, as a child, reading about uranium prospecting in some of the young adult books of the day (in the 1960s it was the Hardy Boys as well as a few other series that I just can’t remember offhand). In my early teens, this made a big impression on me – it wasn’t until the 1976 accident at Three Mile Island that I realized there were people out there who didn’t really agree that nuclear energy was a Good Thing.

Prospecting for uranium is actually not all that difficult – at least, not in principle. It’s the radiation – while uranium only gives off relatively low-energy gamma and alpha radiation (neither of which travel far in the air), in nature, uranium isn’t found all by itself; it’s found in the company of another dozen or so radionuclides that form as the uranium “parent” decays towards stability. While uranium itself is only weakly radioactive, the collection of nuclides in the decay series adds to the collective radioactivity – in addition, many of the progeny nuclides emit higher-energy radiation that’s easier to detect at a distance. This made it relatively easy for prospectors walking over the ground to pick up elevated readings, even on a hand-held Geiger counter – better yet, it can even be picked up from the air. In fact, when I was making aerial flights with the police we would always get higher readings when we flew over cemeteries, some bridges, and some buildings – granite tends to have higher levels of uranium that would always bump our readings up high enough to see, even from 1500 feet in the air. 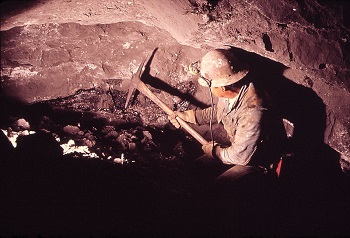 So as long as the uranium-bearing rocks are near the surface, they’re fairly easy to pick up on the surface and even from the air. And even uranium-bearing rocks that are somewhat deeper down can often be picked up as well – soil forms from the underlying bedrock so if the bedrock contains elevated levels of uranium then so will the soil. This will not only cause higher levels of radiation at the surface (and in the air) but will also lead to higher radon levels in the air because radon is yet another of the uranium decay series. If there’s a lot of uranium in the rocks then there will be more uranium in the soil and more radon in the air.

In fact, when I worked for the State of Ohio a number of years ago I remember looking at some maps –radiation levels, radon concentrations, and bedrock geology. The contours matched very closely – places where the Ohio Shale (a dark, organic-rich shale with elevated uranium concentrations) was close to the surface there was more radon in the air, and radiation levels were higher than in places where the first layer of bedrock was made of sandstone, limestone, or even from less-radioactive shales. But then there was an area that had elevated radiation levels, without the radon we expected to see, and in an area where the Ohio Shale was deeply buried. It turned out to be an agricultural part of the state – and it turns out that there are some fertilizers made with phosphate rock from Florida that’s rich in uranium; one of these facilities was in the news recently when it threatened to release water with radioactivity in it to the environment (https://www.bbc.com/news/world-us-canada-56629013). The same radioactivity that raised concerns at the phosphate rock processing plant in Florida also caused anomalous readings in Central Ohio.

What the early prospectors didn’t realize is that uranium can be found even when deep underground – by sampling groundwater, geologists can get an idea of the elements that are present in the rocks the water has flowed through. So if geologists grab a water sample that shows elevated levels of radioactivity, tracing it back to the source rocks can often lead the geologists to the source of the radioactivity…and sometimes to a uranium deposit.

By the end of the 1950s prospectors had located rich uranium deposits in the American West and Southwest as well as in Canada, Australia, and throughout Africa. Not only that, but they had realized that uranium was also associated with a number of mineral deposits – rare earth elements, for example, are chemically very similar to uranium and thorium so many rare earth element ores sometimes contain enough of these elements to extract. But the most interesting example of this was found in South Africa, where some gold mines were found to contain higher levels of uranium as well as the gold – I and my fellow grad students learned about this in a class on economic geology. What I thought was most interesting was that the rocks weren’t worth the expense of mining for the uranium, but it had enough gold to be worth the trouble. And once the rock was at the surface, it was worthwhile to remove the uranium.

Interestingly, technology developed for, among other things, aerial uranium prospecting is finding a use in counterterrorism today. Most notable was the radiation detection system I used to fly within the helicopter, a direct descendant of the systems developed for geologists to look for radioactive mineral deposits a generation ago (albeit with better software). Which actually completes the circle – instruments developed for an earlier generation’s quest to find uranium to help arm America are now being used to help locate and identify nuclear threats posed by terrorists.

The gamma ray spectrum of uranium with its decay products. This is a unique pattern that belongs only to uranium. I collected this spectrum with the same instrument we used for our interdiction surveys.