You are here: Home » Uncategorized » Can Hospitals Refuse Patients Who’ve Been Contaminated with Radiation?

Can Hospitals Refuse Patients Who’ve Been Contaminated with Radiation?

Thu, April 20, 2017 Comments Off on Can Hospitals Refuse Patients Who’ve Been Contaminated with Radiation? by Dr. Zoomie

You know, this isn’t as far-fetched as you might think. I won’t say it happens all the time, but workplace accidents happen all the time and it’s certainly not unreasonable to believe that you could end up with a contaminated injured person. One scenario that comes to mind almost happened to me a few times – a person’s carrying radioactive liquids and trips and falls down. Just falling on a level surface can hurt someone, especially if they hit their head. But a person can also fall down a stairway or brain themselves on a piece of machinery – the possibilities are endless, as we all know. In any event, you have to know that all of your injured people will get prompt medical attention, even if they’re contaminated with radioactivity.

The first thing is to call whatever hospital your people will be sent to as well as whoever will be taking them there – local EMTs, ambulance service, fire department, or whoever it is that makes these runs. All of you need to meet so that you can all talk through what needs to be done so that your people get the medical care they need with the fewest delays possible. This will probably require that you frankly discuss with the others the type and amount of radioactivity your folks might be contaminated with, the risk that it would pose, and how to work with it safely. And what you need to make sure they understand is that a contaminated patient poses little to no risk to medical caregivers – in fact, there’s virtually no plausible circumstance I can think of in which a person at an industrial, medical, or research facility can be contaminated badly enough that it would pose a risk to medical caregivers.

What the ambulance company needs to know is how to keep their drivers, medics, and ambulances from becoming contaminated; or when this contamination might be warranted. When the patient is critically injured and every minute counts, the most important thing is to try to stabilize the patient and get them to the hospital as soon as possible. We can always decontaminate an ambulance, but if a person suffers irreparable harm or if they die…these can’t be un-done. This means that we do whatever decontamination is possible – but only to the extent that it doesn’t delay any medically necessary care or attention.

OK – this gets your person into the ambulance and on their way to the hospital, but you still have to persuade the hospital to let your contaminated workers into the emergency room.

As I mentioned earlier, if the patient is critically injured – if every minute counts – there is neither the time nor the need to decontaminate them prior to treating them. In this case, standard hospital precautions will suffice to keep the medical caregivers safe. So as long as they’re wearing gloves, a mask, and maybe a surgical gown – taking precautions to keep the contamination off of their skin – they should be OK. Having said that, even if they DO get some contamination on their skin it’s not the end of the world – I used to do water chemistry on nuclear reactors and I had skin contamination a number of times; every time it cleaned up with soap and water fairly quickly. I think of radioactive contamination as being like changing a diaper – I don’t want to get anything on my hands but, if I do, I just wash my hands and go on with my day. So – if their condition is critical – the patient can be taken directly to a trauma bay and worked on without posing a risk to the medical staff.

Having said that, it can take days, weeks, even months to decontaminate an emergency room and you don’t want to do that unless it’s necessary. If the hospital has a chance to prepare, there are some things that can be done to reduce contamination of their facilities. Most effective is to put down floor coverings – plastic (preferably textured to prevent slipping) or plastic-backed paper. They can also cover the examination table with plastic, and can even put a plastic covering over the lights, trays, and anything else that might come in contact with a contaminated patient. Even better is if the floor is covered with a seamless floor covering, but this obviously can’t be done on the spur of the moment.

You can see a lot of this in the photo below, which I took at the Fukushima University Medical Center a few weeks after the reactor accident – this is the same trauma bay where the two workers who had radiation burns were initially treated. 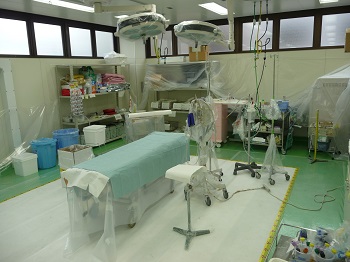 A Trauma Bay at the Fukushima University Medical Center

I could go into a lot more details, but space doesn’t permit. So for the purposes of this article, let it suffice to say that the risks to medical caregivers are well-known, they are very low, and can be managed. While it’s best to prevent contamination in either the hospital or the ambulance, if the patient is in urgent need of medical attention, the patient must come first. And for any medical responder, taking standard safety precautions will help to keep them from being contaminated.

So…. If you are concerned that one of your people might be contaminated with radioactivity AND might need medical attention you need to work out the details with both your local hospital(s) and whoever will be transporting the patient to the hospital. Make sure that they understand the (lack of) risks a patient might pose them and, between you, come to an agreement as to what everyone needs to do in order to ensure your people get the medical care they need, without undue delay if their condition is critical. And the time to do this is now – before one of your people is hurt.