At 2 PM local time on January 19, 2006, an Atlas V rocket lifted off from Cape Canaveral’s Pad 41, carrying a craft that was bound for the outermost part of the Solar System – the New Horizons spacecraft. The payload included an RTG – a radioisotopic thermal generator – powered by 7.8 kg of plutonium (Pu-238 to be precise). How this works is that the plutonium gives off a lot of heat – enough to make it glow red-hot – when it radioactively decays and this heat is turned into electricity through devices called thermocouples. There are plutonium-powered RTGs scattered throughout the Solar System – in orbit around Saturn and Jupiter, gathering scientific information on the Moon, orbiting the Sun, roaming Mars, and entering interstellar space as part of the Voyager probes. And, in the early 1970s, this same technology was being implanted into the chests of heart patients to help keep their hearts beat steadily. 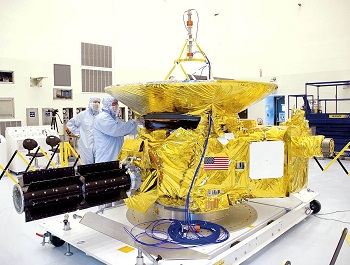 RTGs are actually pretty interesting devices. The whole thing starts off with a heat source – a chunk of radioactive material that gives off enough energy to produce serious amounts of heat. For reasons that go beyond the scope of this piece (which is another way of saying that I don’t quite understand the physics…) when you put two different metals together and heat one end to a high temperature then electrical current starts to flow. If the temperature difference is high enough and the radioactive source is producing enough heat then you can use the current to power a meteorological station, a lighthouse…or a spaceship. 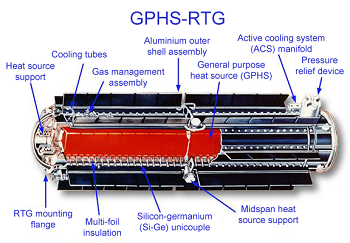 Diagram of an RTG used on the Cassini probe.

The USSR used to make RTGs – they were used to power the meteorological stations and lighthouses I noted earlier, as well as some of their space probes. The US sent most of its own RTGs into space and, with an 88-year half-life, the Pu-238 is able to power the craft for decades (the Voyager RTGs have lost a fair amount of their activity after 40+ years but are still putting out enough energy to keep their radio transmissions reaching Earth). On the more negative side, a number of the Soviet RTGs were abandoned in their former subject nations when the Soviet Union collapsed at the end of the Cold War; one of these caused severe radiation burns in a number of woodcutters who found an RTG in the woods in 2001.

The pacemaker is a device with a much longer history than most would guess. As early as 1889 British physician John Alexander MacWilliam had reported that applying electricity to the heart of a person with a serious arrhythmia could shock the heart back into a normal rhythm. This idea was refined over the next few decades and, in 1928 the American physician Alfred Hyman invented an electro-mechanical pacemaker (even using that name), although the idea didn’t really start to take off until after the Second World War.

The next decade or so saw continued improvements, although some of the earlier efforts delivered the current (painfully) through the skin and had to be plugged into the wall. Batteries helped, although the batteries of the day didn’t last very long and, while the cardiologists appreciated what they had they couldn’t help but hope for something better. In the 1970s, that “something better” turned out to be plutonium “batteries” in a device compact enough to be implanted into the patient’s body. And for the next decade – until lithium-based batteries proved to be sufficiently reliable and long-lived – plutonium-powered pacemakers were regularly implanted into heart patients.

Before and during their use the radiation dose and dose rate from these devices was evaluated and turned out not to be too bad. And while the dose rate on the surface of the pacemaker could be as high as 15 mrem/hr, the radiation they emitted was quickly attenuated by the body so the dose to the patient was only about 100 mrem annually, with even lower doses to their spouse. On the other hand, they contained as much as 4 Ci of radioactivity, which is enough to require a radioactive materials license – I wasn’t able to find out if the patient had to be a licensee (although I doubt it), but the plutonium itself needed to be turned over to the government upon the patient’s death.

There were concerns of course – especially about potential radiation dose to the patient. Luckily, Pu-238 emits alpha radiation almost exclusively and its gamma emissions are so rare and so low in energy as to be insignificant. On the other hand, plutonium is highly toxic, requiring careful encapsulation to ensure the patient could not be accidentally poisoned. Thermal shielding was another concern – a large enough plutonium-238 source will glow red-hot – making these pacemakers a bit larger and heavier than most; on the other hand, the plutonium “battery” would last for the patient’s entire lifetime so it would never be necessary to operate again to change the batteries. The biggest downside, however, was the plutonium itself – when the patient died the pacemaker had to be removed and sent off for proper disposal – burying a patient with their pacemaker wasn’t too bad, but cremation was out of the question.

Eventually, the plutonium pacemaker was superseded by non-radiological versions and the plutonium-powered devices are being turned over to the government so they can be disposed of properly.

What strikes me about the plutonium pacemakers is their similarity to other RTG-powered devices. And while their time has come and gone, I think it’s neat to think of a device that can be used to steady a heartbeat, to illuminate a lighthouse on the Arctic Ocean, or to power craft on Mars, circling Saturn and Jupiter, and making humanity’s first push into interstellar space.