Why we should care about noble gases

So a friend sent me an email on Monday (June 14, 2021) that linked to a news story reporting that China’s Tianshan nuclear reactor seemed to have elevated levels of noble gases in the reactor coolant. This caused some mental alarms to sound – muted at this point, but there nevertheless. But the reason for these alarms isn’t very obvious to the vast majority of the population – and why noble gases should cause any sort of reaction calls for a little explanation. So let’s see if we can figure out where these noble gases come from and what they might portend. But to do that we’ve got to get into things like how fission works, how reactor fuel is made, and how we can use this knowledge. So…let’s get started!

Where noble gases come from

When uranium atoms fission they split into two radioactive atoms that are called fission products (also called fission fragments). These aren’t equal in size – most are clustered around masses of about 135 and 95 atomic mass units (AMU). And as it turns out, there are two noble gases (krypton and xenon) that fall into these peaks. This means that fission causes (among other things) these fission product noble gases to be produced and they accumulate in the fuel as the reactor operates. Most have relatively short half-lives, but some (such as Kr-85) stick around for a while. Luckily they’re normally trapped in the fuel matrix – we’ll talk about that next.

How reactor fuel is made

Reactor fuel is made up of uranium oxide that’s compressed into a pellet that’s an inch or so in diameter and about the same length: 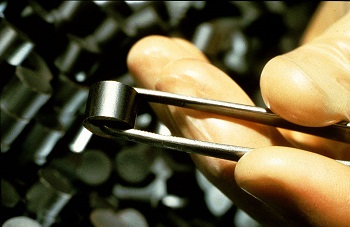 These fuel pellets are loaded into fuel rods that are a few tens of feet in length, clad with an alloy of zirconium, a tough and corrosion-resistant metal. These fuel rods are then assembled into fuel bundles that are arranged in the reactor core in a pattern that will sustain a critical reaction while permitting the fuel to be cooled and that leaves room for neutron-absorbing control rods to be inserted to help control the chain reaction. As long as the cladding remains intact the fission products are contained safely in the fuel pellets. But if the cladding cracks or otherwise becomes compromised then these fission products can be released into the reactor coolant. And the cladding isn’t made of pure zirconium. The process of making it and loading it with fuel results in traces of uranium (called “tramp uranium”) to be present in the cladding.

What it all means

Radioactive krypton and xenon are not found in nature, and they’re certainly not found in the ultra-purified water circulating through the reactor plant. So if we find evidence of these in the reactor fuel it tells us that there might be a crack of some sort that’s letting the fission products into the reactor coolant.

But here’s the thing – the tramp uranium is also fissioning and since it’s in the cladding some of the fission products can shoot out of the cladding and into the coolant. This means that there are always traces of fission product noble gas in the reactor coolant. So simply finding them in the coolant doesn’t necessarily mean that there’s a problem with the fuel – before we can determine that we need to know how much noble gas is in the coolant and how the levels we’re measuring differs from what we normally see.

Something else we have to be aware of is that the amount of this noble gas in the coolant depends on the reactor power – if reactor power increases then we see more in the coolant than we do at low powers. But even more than that – since these radionuclides don’t decay immediately, they can stick around for hours after reactor power drops. So we need to calculate a “power-corrected” fission product activity to see how what’s measured compares to what we expect to see. The power-correction calculations aren’t necessarily highly complex; at the same time, it’s easy to make a mistake, especially if power is changing frequently. On the nuclear submarine I was on power changed frequently – every time we changed speed – and commercial reactor plants change power as well, responding to changing electrical demand during the day.

What’s the situation at Tianshan?

And that brings us to Tianshan. The Tianshan reactors were built by a consortium that includes the French utility EDF (Électricité de France), Framatome (a French design and construction firm), and the Chinese government. Framatome got word that the concentrations of fission product noble gases were higher than expected and they asked the US government for help in interpreting the laboratory results.

The problem is that there’s very little information that’s been released to date. The Chinese government notes that fission product noble gases are normally found in reactor coolant, which is true, and that the levels that have been found are more or less normal. The problem is that we don’t know what the normal levels are on the Tianshan reactor, we don’t know the levels that have been found, and we don’t know the power history so we can’t do the power corrections. So the information that’s available isn’t sufficient to know if the noble gasses are really elevated or if they just seem that way. And without knowing that we don’t know how significant these lab results might be.

This is another question that we can’t really answer at this time, but there are a few possibilities.

If there really is a defective or compromised fuel rod then we’ll likely continue to see noble gas concentrations rise for a while, after which they should stabilize. We might also start to see other radionuclides show up, especially if the crack or defect gets worse over time. And the radionuclides we see ought to follow a predictable pattern – first we can expect to see volatile elements such as iodine and cesium, which are in the fission product peak close to 135 AMU. This is what I saw when I was in the Fukushima area after the accident there – I-131, Cs-134, and Cs-137 were all present, and they were exactly what I expected to see (the device I was using wasn’t the correct instrument to measure noble gases).

At the moment we can be reasonably confident that the reactor isn’t melting down – if that were the case then we’d see a wider variety of radionuclides, including some that have higher melting and vaporization temperatures such as strontium, molybdenum, and so forth. The fact that these have not been reported suggests that the reactor is not suffering a meltdown.

I should also note that fuel element defects are not unheard-of – they don’t happen frequently, but they do happen and they’re not necessarily a disaster. In fact, they happen often enough that the International Atomic Energy Agency has even written a document titled Review of Fuel Element Failures in Water-Cooled Reactors (https://www-pub.iaea.org/MTCD/Publications/PDF/Pub1445_web.pdf). On the other hand, if there’s a problem with a fuel element then the utility will have to do its best to limit future damage to the fuel element and might need to try to locate the exact fuel rod that’s damaged to that it can be removed and replaced. This can be a long and expensive process – if the defect isn’t too bad then the best course of action might simply be to operate the reactor carefully until the next refueling when the damaged fuel can be removed and replaced with a new one.

At the moment we just don’t know very much, which means that there’s far more speculation than fact. It is entirely possible that the levels of fission product noble gases that so concerned Framatome are actually no more than what’s to be expected for the Tianshan reactor. It’s also possible that there is a fuel element defect similar to what a number of other reactors have experienced. Or this could be the prelude to something more serious – there’s just no way to know. But it seems fairly reasonable to assume that, as of now, the reactor is not melting down or we’d be seeing a lot more than noble gas in the coolant.

So at the moment, I’m interested – but I’m not worried. At the same time, I’m going to keep looking for more information to see what else I can learn.