I’m a geek. I’ve gotten used to this fact, as have my children, my wife, and other family and friends. And it’s why, when I fly, sometimes I monitor radiation levels. I’ve learned that this can sometimes make the person sitting next to me a little nervous – I’ve learned not to talk about it much. Luckily my radiation detector has a cell phone app so I can leave it in my carry-on bag and monitor it via Bluetooth from my seat…I just need to remember to turn off the alarm so my bag doesn’t beep annoyingly in the overhead storage bin.

What’s interesting is that, as we ascend after takeoff, radiation levels drop steadily. Actually, this part isn’t very surprising because when we’re on the ground most of the radiation I’m measuring comes from radioactivity in the rocks and soils and, as we gain in altitude we’re getting further and further from the surface, reducing the radiation coming from the rocks and soil. But then when we get to about 10,000 feet the readings stopped dropping – interesting. And by 12,000 feet or so they started rising again – even more interesting. By the time we were at our cruising altitude they were several times higher than they’d been at ground level – not only that, but I was also seeing many more neutrons than I’d seen at the surface. Curious.

What I was seeing was nothing new – except to me the first few times I made these measurements. The first time it was noticed was over a century ago, in 1911 when Austrian physicist Victor Hess was taking a balloon flight, and he had his own radiation instruments with him (albeit without Bluetooth or a phone app) when he noticed the same thing I was to see a century later. Hess was more curious than I was because he was the first person to see or hear of this effect, while I had the benefit of knowing about his work. Hess recognized the physics behind the lowering dose rates that happened at first, but the rising dose rates as he ascended still further had him puzzled. What he finally realized was that he was seeing radiation coming in from outer space – cosmic rays. Then he just needed to figure out what they were.

Hess first thought that the Sun might be the source of this cosmic radiation. But when he arranged to make measurements during a solar eclipse he saw the same effect – while he still didn’t know their source, he could rule out the Sun – cosmic rays apparently originated from somewhere outside of our Solar System. Hess went on to be awarded the 1936 Nobel Prize in Physics (https://www.nobelprize.org/prizes/physics/1936/summary/) for this discovery. 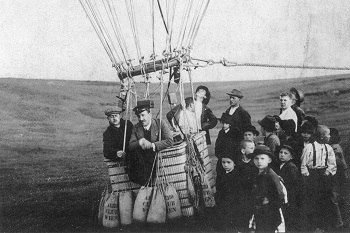 It turns out that I know more about cosmic rays than Hess did. That’s not because I’m smarter than he was (and goodness knows, I’m not!). Rather, it’s because I’ve been able to read over a century of research on the subject, much of it using instruments that Hess never even dreamed of. Not only that, but cosmic rays have been studied by physicists and astronomers – even by geologists – who have teased out details far beyond the science of Hess’ day.

One of the things we’ve discovered, for example, is that most of the cosmic radiation we’re exposed to originates elsewhere in our galaxy in the form of high-energy particles blasted into space by exploding stars. These are the nuclei of atoms that have had all of their electrons stripped away and that have sailed through space until they encounter our planet – they have so much energy that they punch through the Earth’s magnetic field and stream into our atmosphere. There, they’re likely to smash into an atom in the atmosphere, initiating a chain reaction of events giving rise to a cosmic ray air shower (https://scied.ucar.edu/image/cosmic-ray-air-shower) – a cascade of gamma rays and particles, some of which can create radioactive tritium (H-3) and carbon-14. Other particles can smash into airplane fuselages (where, among other things, they show up on my radiation detector) and still more filter down to sea level to give us radiation dose of between 20-30 mrem annually.

Something else we’ve learned over the decades is that cosmic radiation accounts for about 10% of our annual exposure to natural background radiation – and that this remains relatively constant throughout the solar cycle (the decadal waxing and waning of solar activity). The reason for this is that, when Solar activity is low, the relatively anemic charged particles from the Sun can’t penetrate to sea level, but the much higher-energy galactic cosmic rays can. On the other hand, when the Sun’s activity is high the solar cosmic rays are more energetic and more of them can penetrate more deeply into the atmosphere, exposing us to more radiation from the Sun; at the same time the stronger solar wind helps to sweep the galactic cosmic rays from the inner solar system, reducing our exposure to them. These two factors tend to cancel each other out with the net result that our exposure to cosmic radiation remains relatively constant throughout the Solar cycle.

We’ve also found out that cosmic rays can induce radioactivity in rocks that are exposed at the surface – cosmic ray air showers produce neutrons and when neutrons are captured by stable atoms they can become radioactive. My MS advisor made use of this fact – it turns out that you can tell how long ago a rock first became exposed to cosmic rays by studying the induced radioactivity and this can be used to determine the rate at which glaciers are retreating. By analyzing rocks from Antarctica, for example, my advisor was able to tell when rocks were last covered by glaciers; using similar analyses a friend of mine was able to tell when the glaciers melted back from his front yard in Kansas.

Another Kansan, astronomer Adrian Melott has other speculations about cosmic rays – he thinks they might be linked to the manner in which life has evolved on Earth. He notes that our Solar System bobs up and down through the galactic disk every 40-50 million years or so and postulates that when we’re on “top” of the disk (the side facing the direction of our travel through intergalactic space) we might be exposed to more cosmic radiation than when we’re on the “bottom” of the disc, and that this extra smidgeon of radiation might be enough to trigger faster rates of evolution. And there does seem to be some correlation between the fossil record and the timing of our excursions above the plane of our galaxy…so he might have a point. 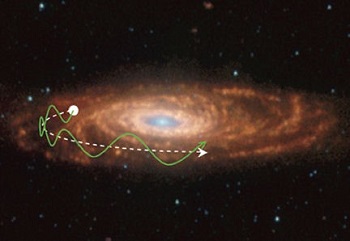 But then there’s the stuff we’re still trying to figure out….

On October 15, 1991 a cosmic ray observatory (the Fly’s Eye camera – https://en.wikipedia.org/wiki/High_Resolution_Fly%27s_Eye_Cosmic_Ray_Detector) in the Utah desert recorded the debris of a cosmic ray with a staggering amount of energy – in physics terms it was about 300 billion billion (3×1020) electron volts; in more prosaic terms this was a single atom that packed the same wallop as a Little League pitcher’s fastball. Not only was this unprecedented, but it was also beyond anything science could explain.

The first thing that science was unable to explain was how an atom could have been endowed with so much energy. First, even exploding stars – supernovae – lack the power to impart so much energy to a single atom, and scientists were having problems thinking of any other phenomena that could do the trick. But then there was another problem – even if they could find a mechanism to accelerate an atom to so high an energy, it should have been whittled away while the atom was in transit across the galaxy through collisions with the rare atoms of hydrogen or even by running into photons – for the most energetic particles in the universe, anything they encounter will have a lower energy that will slow them down ever so slightly. As far as scientists could understand there was no way particles with so high an energy could exist…and yet they did.

As things stand now there are a few candidates that might be able to boost particles to so high an energy – the super-massive black holes in the cores of quasars are a candidate, as are the huge lobes of energetic gas near some galaxies that emit powerful beams of radio-frequency radiation. Another hypothesis dates back to the earliest days of the universe – speculating that cosmic-scale shock waves from the epoch of galaxy formation might have accelerated particles to these velocities. This latter is the most ancient, but there are some that are even more exotic, including the decay products from supermassive particles formed by what are called topological defects in the fabric of space itself (and no, I don’t really know exactly what they mean by that either, but it sounds pretty cool). But we still have to figure out how these particles can hold on to their energies for so long – especially when we consider that they seem to originate from outside of our own galaxy. 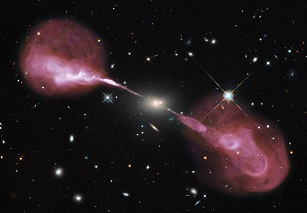 (a radio galaxy – the jets that form the large lobes might be one source of ultra-high energy cosmic rays https://www.nasa.gov/images/content/709514main_hs-2012-47-a-print.jpg)

Interestingly, these highest-energy particles provide a degree of comfort to the designers of our highest-energy particle accelerators. Every now and again when a new accelerator pushes to higher energy levels there’s a concern that it might produce new types of particles (https://phys.org/news/2014-02-chances-particle-collider-strangelets-earth.html) or miniature black holes or that it might even damage the structure of space – any of which could be dangerous. So physicists examine the matter – to date they’ve always decided that the new accelerator was safe to operate. Of course, they might have made a mistake, or there might be gaps in our understanding of the physics. But then they remember the ultra-high energy cosmic rays – boosted by mechanisms we still don’t understand to energies a million times greater than any accelerator we can yet make. The fact that the Earth still exists tells us that even these highest-energy particles can’t do extensive harm, which tells us that our accelerators are most likely safe to operate.

Sometimes when I’m flying and looking at my radiation instruments I think about a star that exploded somewhere in space – maybe in our galaxy, maybe in a galaxy halfway across the universe – and that spat out a flurry of atoms at incredible velocities. I think about these atoms speeding through space for eons – maybe since before our planet was even born – deflected time after time by the magnetic fields of stars, of clouds of interstellar gas, and that are woven into the fabric of our galaxy and in the spaces between the galaxies. And after so long a journey, to come to a rest in my radiation detector…just seems too mundane an end for so long and exotic a trip.