You are here: Home » Uncategorized » From the Chest to the Cosmos

From the Chest to the Cosmos

A solid chunk of plutonium-238 (Pu-238) is so hot that it glows red-hot. Where the heat comes from is the radioactive decay of the plutonium – every time a plutonium atom decays it gives off a high-energy (5.6 MeV) alpha particle and all of this energy is deposited in the chunk of plutonium. A single alpha doesn’t have enough energy to make plutonium glow – but every single gram of Pu-238 undergoes enough radioactive decays to produce slightly more than a half-watt of heat; one kilogram will generate more than 500 watts – in two hours this piece of plutonium will produce 1 kilowatt-hour of energy, enough to light a small home. Incidentally, 1 kg of Pu-238 will fit inside a typical shot glass. This isn’t the place to go through the detailed calculations, but it’s fairly easy to see that it doesn’t take much plutonium to produce a fair amount of energy – if we can figure out how to use it.

Luckily, there are these things called thermocouples! It turns out that if a thermocouple is heated on one side and cooled on the other – more specifically if there is a temperature differential from one end of the thermocouple to the other – it will generate electricity. Which means that if we simply let the plutonium do what it wants to do – undergo radioactive decay and heat up – we can use thermocouples to extract some of that energy to produce electricity. Then the question is what to do with it.

One of the things we can do with this energy is to power spacecraft. We’ve sent plutonium-powered RTGs to Mars to help search for evidence of past or present life. Other RTGs are currently orbiting Jupiter, RTG-powered spacecraft have explored Saturn, zipped past Uranus, Neptune, and Pluto, and the RTG-powered Voyager craft are currently humanity’s first probes to enter interstellar space. Plutonium power has carried, if not humans, then our robot explorers throughout the Solar System – the heat from Pu-238 alpha radiation, even after a half-century of decay, is still powering our most-distant probes.

Over a century ago, in 1889 Scottish physiologist John Alexander MacWilliam realized that applying electrical current to the heart could help to keep it beating regularly. Over the next 50 years his observations were refined and provided the foundation for what evolved into the modern pacemaker.

The beating of our hearts, something that happens tens of thousands of times daily from before we are born and through the entirety of our lives, is triggered by a tiny electrical impulse to a small cluster of cells called the sinoatrial node, this propagates through the heart, causing the four chambers to contract in the proper sequence to send blood flowing through our bodies. The problem is that this system can malfunction, causing erratic patterns that can range from annoying to life-threatening. What MacWilliam discovered was that a stable heartbeat could be triggered by electrical signals from outside the body as well as through the natural system. Over the years the equipment needed to produce this regular current has become increasingly smaller, to the point where it can now be carried inside the body; the devices have also become increasingly sophisticated and able to not just produce a regular series of electrical pulses, but to adjust to different levels of physical activity and even to recognize and respond to unanticipated arrhythmia as they arise.

The problem is that it takes energy to produce this electrical signal and even more energy to power the electronics that give modern pacemakers so much capability. Early pacemakers had to be wired into an external power supply because batteries didn’t hold enough energy to power a pacemaker for an entire day. But in the 1960s and 1970s engineers realized that the heat of radioactive decay could be used to power pacemakers just as easily as they could power spacecraft. This led to the development of a plutonium RTG-powered pacemaker that could be implanted into the body, requiring no battery changes, no recharging, and that would last for decades. 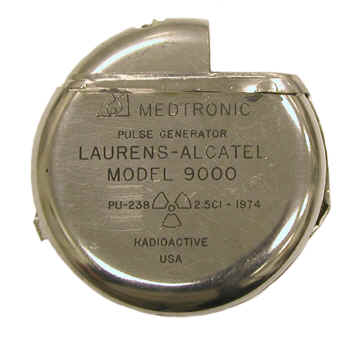 Pictured here is a Medtronic plutonium-powered pacemaker from 1974.

Using plutonium raised some concerns of course, because most people aren’t quite comfortable with the idea of implanting radioactivity into their bodies. But it turns out that the 2-5 curies of plutonium they used doesn’t emit high levels of radiation – the radiation dose rates at the surface of the pacemaker were only about 5-15 mrem/hr and the patient would only receive about 100 mrem annually to their whole body – even over a lifetime this is not enough radiation dose to cause problems.

Plutonium-powered pacemakers were only used for a short time before being replaced with rechargeable lithium batteries; at present, there’s still a small number of them in the chests of patients here and there, but only a handful. Like so much other technology, they had their time, but that time has passed. But it’s sort of cool to think that, for awhile, there were people walking around with the same technology implanted in their chests that was also roaming the outer reaches of the Solar System.