You are here: Home » Uncategorized » If the shoe fits….

If the shoe fits….

When I was younger I remember my father telling me about when my grandparents took him to get shoes when he was a kid – one of the things that really made an impression on him was this device that he could stand on and push a button and he could see an x-ray image of his feet inside the shoes – not only was it a good way to see if his feet were going to be cramped inside his new shoes, but he could wiggle his toes and see his toes and toe bones move in the image he was looking at. I got the impression he’d sometimes hit the button a few times in a row because the image was so neat to look at. The way he described it, it sounded pretty cool – it made me wish I had something like that to play with myself. Alas, I was born too late and these shoe-fitting fluoroscopes were no longer in use.

Awhile later – actually, a few decades later – I found out a little more about the things; in particular, that they’d been outlawed sometime between my father’s childhood and my own. But as I started working in health physics I started hearing occasional tales of the shoe-fitting fluoroscopes, usually with an undercurrent of “Whatever were they thinking?”

When I was in my 30s I worked in radiation safety at two hospitals, one in Ohio and one in Upstate New York. Here, I started learning more about medical fluoroscopes and learned more about how high the dose rate can be in the beam with the machine turned on. In fact, as I found out, people working regularly with fluoroscopes tend to get more radiation exposure than even most nuclear power plant workers, and fluoroscopes cause more radiation injuries than any other device of which I’m aware. 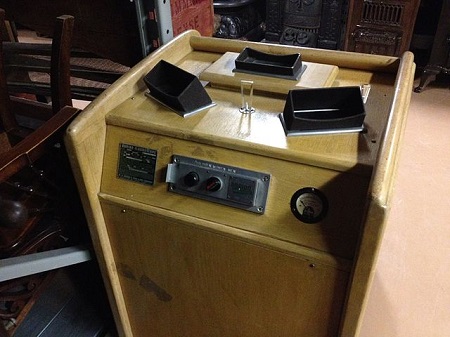 A decommissioned Adrian Fluoroscope showing operator’s controls and three viewing screens on the top of the device. On the opposite side is a low platform with two half-circle holes cut into the vertical back surface for inserting the fronts of the shoes.

At one hospital I worked at there was an older fluoroscopy machine that had a dose rate of 90 rem per minute in the beam. Think about that – it takes about 300 rem to cause skin burns, so leaving that machine turned on for just a little more than three minutes could start to cause burns to the patient. Interestingly, the dose rate from the shoe-fitting fluoroscopes was to be limited to 2 rem to the feet for a five-second exposure, or 24 rem per minute, which is comparable to the dose rate from medical fluoroscopy machines in the 1990s and 2000s (newer machines have lower dose rates). On the other hand, a lot of machines didn’t comply with the guidelines – some were measured as having dose rates of up to 75 rem per minute. On one of those machines, every time my father wiggled his toes, he was getting several rem to his feet. If he used one monthly, he’d have been close to today’s annual 50-rem dose limit to the extremities.

In the 1950s there were also concerns that irradiating the feet and legs of children might affect the growth plates in their leg bones, affecting their future height – given the fact that my father is above-average in height, however, it seems that he didn’t suffer from this. Although, I guess I should add that I was about four inches taller than him, so who knows how tall he might have been….

I suppose that’s what a little more personally interesting to me is the waist-level dose – the estimate there was anywhere from about 30-170 mrem to the pelvis for each 20-second exposure. So if my father had spent 20 seconds wiggling his toes each month he’d have received as much as 2 rem of gonad dose every year. And it’s reasonable to wonder if this might have had any effect.

It turns out it didn’t. And I’m not basing this on what I see in the mirror every day (as impressive as that view might be!) but, rather, on the understanding we’ve accumulated over the years on the reproductive effects of ionizing radiation. And it turns out that there’s no evidence that pre-conception radiation exposure is linked to any sort of health effects at all in children conceived later. So none of the kids who were wiggling their toes back in the 1930s, 1940s, and 1950s had to worry about their future kids.

In fact, it turns out that the kids (and adults) who were playing with the shoe-fitting fluoroscopes don’t appear to have been affected at all – but some of the sales staff were because they might be using the machines repeatedly every day, with their hands in the beam as they squeezed the shoes (and the feet within) to show how the shoes might fit under different circumstances. One saleswoman, for example, developed a case of dermatitis from having her hands in the fluoroscope beam so often; there was also an incident in which a shoe model had her feet in the machine so often that she developed skin burns and other radiation damage – her lower leg eventually had to be amputated.

As we learned more about the effects of radiation on health, as public concerns about radiation grew, and as regulations started ratcheting down these devices eventually went away – by 1960 or so they were pretty much extinct in the US. The consensus is that the health effect on the customers was negligible; likely because even kids don’t get new shoes all that often.