You are here: Home » Uncategorized » NORM Who?

My very first radiological consulting project was for a glass-making company; they were re-bricking one of their furnaces and a load of replaced refractory brick they were disposing of ended up tripping a radiation detector at the landfill. One of my colleagues nodded knowingly and said “Norm.”

I’d been with the company for more than a year and there was nobody by that name in our office so I was confused. “Norm? Norm who? Is he in one of our other offices?” My colleague started laughing.

Turns out that NORM stands for Naturally Occurring Radioactive Materials, and that’s what the refractory brick contained – one of the components was a zirconium mineral and, because they have similar geochemistries, anywhere we find zirconium we’re going to find some uranium as well. And there’s not just the uranium – as uranium decays to stable lead it goes through over a dozen intermediate steps, so the refractory brick also contained traces of radioactive thorium, radon, radium, polonium, and more. This is what the landfill’s portal monitor was picking up. And since we’re so good at detecting radiation, the amount that gave a clear signal – strong enough to set off the alarm – was nowhere close to what it took to be harmful.

NORM was in the news not long ago, although it was easy to miss the reference (https://news.wfsu.org/state-news/2021-04-13/state-of-florida-plans-cleanup-of-old-piney-point-phosphate-plant – combined with information published by the EPA
https://www.epa.gov/radtown/radioactive-material-fertilizer-production).

Here too, due to the geochemistry of uranium, phosphate rock also tends to have elevated levels of the stuff. Interestingly, I saw evidence of this in aerial radiation surveys over my home state of Ohio – I also saw it when I was doing radiation surveys at the racetrack in Indianapolis – the greenish-yellow area in the image here shows the higher radiation levels we detected. 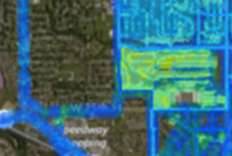 I’ve run across NORM in a lot of places – in Iranian hot springs, in coal seams, in a former mineral processing facility in NYC, in the North Dakota oil fields, and many more. In some cases – primarily fossil fuel deposits – the NORM is there because uranium is insoluble in water that lacks oxygen. Since decaying organic materials removes oxygen from water, swamps, and other places where there’s stagnant water that can collect leaves and plants – which turn into fossil fuel deposits over millions of years – tend to collect higher levels of uranium over time. In other cases, a mineral will be made of elements that are similar to uranium – the atoms are close to the same size and they have similar chemical properties – so it’s easy for uranium to slip into the crystal structure of any of a number of minerals, including ores of niobium, vanadium, titanium, and any of the rare earth elements. This happens in our bodies too, by the way – many actinide elements, as well as radium, will also slip into the crystal structure of our bones. And – getting back to fossil fuels briefly – radium and other radionuclides that come from the decay of uranium will become trapped inside the scale lining the pipes that convey oil and natural gas (as well as the brines that tend to accompany hydrocarbon deposits) from the depths to the surface as well as the pipes and tanks used to process and store these fuels. 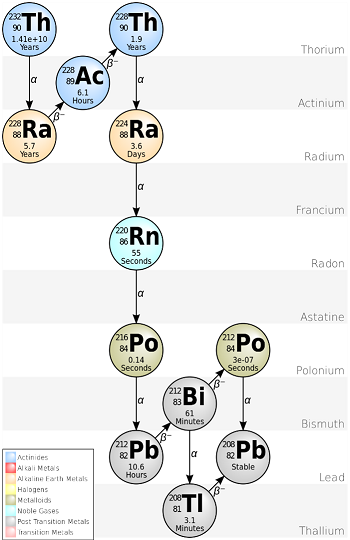 Now – consider a chunk of monazite (monazite is a rare earth element ore) that’s contaminated with thorium. Over time, the thorium decays to stability through a series of a dozen progeny radionuclides, every one of which is radioactive. So the monazite rock also contains isotopes of radium, actinium, polonium, bismuth, and more. In addition, monazite contains cerium, lanthanum, and other rare earth elements, along with phosphorus and oxygen. About 50% of the monazite consists of the rare earth elements for which it’s mined and the rest is phosphate, thorium, uranium, and oxygen (the oxygen combines with all of the metals in the rock).
So – when monazite is processed to remove the rare earths the reside is only about half the weight of the original rock, but it contains all of the original radioactivity. Just by removing the rare earths the remaining waste (called mill tailings) have double the radioactivity concentrations as the original rock. The NORM concentrations in the tailings were enhanced by the processing; what we now have is called TENORM (technologically enhanced naturally occurring radioactive materials).

The other place we can find NORM is in rocks. I’ve already mentioned why uranium tends to end up in coal and hydrocarbon deposits – for the same reason we also tend to see it in dark (organic-rich) sedimentary rocks; during the Second World War, the Swedes mined a black shale deposit to produce shale oil and used the residual shale to make cement to build houses for the poor. Unbeknownst to them, the oil shale was emitting high levels of radon from the decay of NORM uranium and thorium, causing excessive radon exposure to those living in the homes. We tend to see the same – along with slightly elevated levels of radiation at the surface – in many places where the bedrock consists of dark organic-rich sedimentary rocks.

With igneous rocks, it’s just the opposite. The granite countertops in my apartment are a light gray, and I’ve been able to measure uranium, thorium, and potassium (along with traces of radium) in my kitchen. It turns out that, with igneous rocks, it’s the lighter ones that have higher levels of radioactivity. That’s because uranium, thorium, and potassium atoms are all on the large side so they go into the last minerals to crystallize – these are the minerals that form gray, pink, and red granites and other light-colored igneous. Black igneous rocks come from the mantle and are almost devoid of radioactivity. As an aside, this is why natural radiation levels are fairly low in Hawaii, Japan, Iceland, and other islands made of dark rocks that come from the Earth’s mantle. Oh – I guess I should also mention that if an interior decorator recommends “black granite” to you…well…it’s not really granite. But, then, your decorator isn’t a geologist and they know that it’s easier to sell “black granite” than it is to sell diorite or basalt, which is what the rock really ought to be called.

Unfortunately, regulation of NORM and TENORM is a mess in the US, primarily because the Nuclear Regulatory Commission isn’t permitted to regulate the stuff. This means that it’s left up to the states to regulate – this, in turn, means that every state has its own take on the matter. Some states have regulations that are remarkably good, some have no NORM/TENORM regulations at all, and some have regulations that are just out-and-out bad – and there are places where you can find all of these within just a few hours’ drive of each other.

We can’t get away from NORM – it’s been on Earth before Earth was even a fully-formed planet. The fact is, we live on a planet that’s just a little radioactive. But that’s not a bad thing – at the very least it means that every organism that’s ever lived on Earth has been exposed to radiation from the NORM that’s always been a part of our planet and, in the past, levels were higher than they are today. It means that our bodies – our cells – evolved to deal with this level of radiation damage, which is why NORM so rarely poses us a risk. This is why you should just enjoy your granite countertops – don’t be scared of them.