A bit over six billion years ago a star exploded somewhere in our galaxy – we can’t be sure where the star was so long ago, but we know that it was within shouting distance (on a galactic scale) of a cloud of gas and dust. A shock wave from the supernova slammed into the cloud, compressing it and setting in motion a series of events that would, millions of years later, lead to the birth of a star and the formation of a number of planets – we’re currently all sitting on the surface of one of those planets.

When stars are active they produce energy by fusion – first of hydrogen, then of helium, and working up to iron. But fusing iron doesn’t produce energy, it sucks it up – when a star starts burning iron it collapses, forming a neutron star or a black hole and the outer layers rebound out into space, blowing the rest of the star apart into space. During this explosion, every element heavier than iron is formed, including gold, lead, and uranium. This debris emerges as a shock wave that can trigger the collapse of existing clouds of gas and dust; whatever is left will eventually become part of such a cloud itself. Thus, the cloud from which the Solar System formed contained uranium, and the shock wave that caused its collapse contained still more.

Over time, as the Earth cooled it began to solidify, the first rocks forming a thin skin that floated like pond scum atop the underlying magma as the magma itself circulated, driven by convection. As the world churned the various elements began sorting themselves out with the large atoms (including uranium) partitioned into the solid rocks of the nascent crust, iron and nickel sinking to form the core, with the mantle lying in between.

Over the eons, the rocks that contained the uranium began to weather and the grains bounced their way down the stream beds, collecting in areas where the speed of the water slowed, just as grains of gold do. But the early atmosphere lacked oxygen, as did the water and since uranium is insoluble in anoxic water the grains just sat there. And then, two billion years ago, that changed – photosynthesis produced oxygen that flooded the Earth’s atmosphere and saturated the water and the uranium began to dissolve, precipitating out again in places where chemical reactions had again stripped oxygen from the water.

One such location was in a part of the planet that would one day become part of the nation of Gabon. Here, the water was percolating through sandstone and depositing nodules of uranium in the vicinity of some hydrocarbon deposits, bathed with groundwater. And this is where things start to get interesting!

Nuclear reactors consist of clumps of uranium surrounded by water – when a uranium atom fissions it emits (among other things) neutrons. The neutrons bounce off the hydrogen atoms in the water molecules and slow down, just as a cue ball slows down as it bounces off the other balls of the same size – this is important because slow neutrons are more likely to be absorbed by a uranium atom and to cause it to fission. If one of those neutrons is absorbed by another uranium atom and causes a second fission the reactor is said to be critical. In our sandstone, the uranium nodules were surrounded by water…just as in a nuclear reactor. And, just as in a nuclear reactor, the water slowed down the fission neutrons to the point where they could be absorbed by another uranium atom.

Uranium is comprised of two isotopes – one has a mass of 235 atomic mass units (AMU) and the other is slightly heavier with a mass of 238 AMU. The lighter atoms of U-235 fission fairly easily, but they account for less than 1% of uranium atoms found in nature – too few to sustain a criticality. That’s why we have to enrich uranium – to increase the amount of U-235 to somewhere around 3-6% of the uranium atoms. And this is the last piece of the puzzle.

U-235 and U-238 have astonishingly long half-lives – about 4.5 billion years for U-238 and a mere 700 million years for U-235. This means that the fissile U-235 decays more rapidly than does U-238; calculating the amount of each that was present 2 billion years ago reveals that natural uranium at that time was around 3.5%…at the lower end of the band of concentrations we have in reactor fuel today. Thus, in one place there were lumps of uranium containing enough U-235 to sustain a chain reaction that was sitting in a water-saturated sandstone formation. And about 1.8 billion years or so ago, enough uranium had precipitated that the occasional spontaneous fission sparked a chain reaction – the uranium ore deposit had become a reactor.

Fast-forwarding to the 1970s, French geologists located a rich uranium ore deposit in Gabon that they started to extract at the Oklo uranium mine. As the uranium was extracted and enriched the radiochemists carefully tested the uranium enrichment at various stages of the process and were surprised to see that there was less U-235 than they expected. Through some impressive investigatory work they came to realize that what they were mining was the remnants of a natural nuclear reactor – the first (and, to date, only) ever found. And in the 40-odd years since it was discovered further study has helped to tease out some of the details of its operation.

As the reactor operated the fissions heated up the water percolating through the sandstone; as it warmed up it became less dense – it might even have boiled off entirely from time to time. When this happened, the neutron moderation ground to a halt and the reactor shut down. When the rocks and the water cooled the chain reaction restarted and the reactor would fission some more. It seems to have continued in this vein for about 100,000 years. And that leads us to another intriguing detail – with some implications for our storage of nuclear waste. 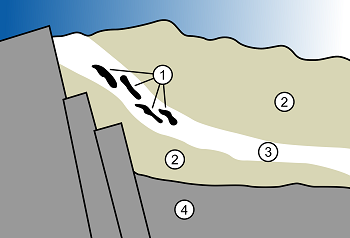 We have a very good understanding of how fission works and what’s produced when uranium atoms split. And when examined in detail, physicists realized that virtually all of the fission products formed during the millennia of operation are still present in the rock – in spite of being located in porous and fractured rocks that were saturated with water for the better part of 2 billion years. Such a location would never be approved for radioactive waste disposal today yet, in spite of the rocks’ unsuitability, the fission products are still there. With no planning, no engineering, and a lousy (by our standards) location Nature managed to store the waste safely for eons – this bodes well for our ability to store radioactive waste in a well-designed and well-constructed disposal site located in an impermeable rock formation.

And, interestingly, the conditions under which the reactor formed and the rock formation that hosted it are hardly rare…what’s rare is the preservation of such a formation for so long. Earth might have once been littered with natural reactors and we might never know. And think about it – uranium from a dying star flew through space, causing the collapse of the pre-solar nebula (itself the detritus of other dying stars) and formed the Sun and the Earth. There it sat, gradually moving into the continental crust, eroding and collecting in streams…and waiting for oxygen levels to increase to the point where it could form an ore, and waiting until there was enough uranium in a suitable rock formation to achieve criticality. We don’t know how many times it might have happened on Earth. But we do know that it happened once – and that’s pretty cool.