You are here: Home » Uncategorized » Radioluminescence

I’ve been working in radiation safety and related fields my entire adult life (well…except for a short stint during which I worked the night shift running copier machines on campus). I got used to hearing the standard jokes about glowing in the dark (for example, “Do you need a night light?”), and I have to admit that I came up with some myself. For that matter, one of the nicknames for Navy Nukes (those of us who worked in Naval Nuclear Power) was glow-worms. The thing is – things (including people) who are exposed to radiation don’t glow in the dark. Don’t get me wrong – radioactivity has been used in things that glow in the dark for over a century – but the glow doesn’t come from the radiation directly; it’s a little more interesting than that.

What’s happening is that some materials give off light when they’re hit by the radiation. Looking at the science behind it can get fairly complicated – the short version is that the radiation deposits energy into a substance and that energy goes into (among other things) bumping electrons up to higher energy levels. They only stay there for a short period of time before they drop back down to what’s called the “ground state” – when the electrons drop back down, they give off a greenish or bluish photon. That’s where the glow comes from.

This phenomenon – called radioluminescence – was discovered over a century ago and it was put to use almost immediately. We’re all familiar with watches with luminous dials, making it possible to tell time at night. Radioluminescent paint was also used for aircraft instruments, compasses, gunsights…during the First World War soldiers would even put a small radioluminescent patch on their uniform to help the person behind them follow a little more easily when marching at night. This spread to the private sector as well – luminous paints, clock dials, even fishing tackle and golf balls were painted with radium compounds to make them easier to see in the dark.

Interestingly, this phenomenon had been used even before the war by Ernest Rutherford, a New Zealander whose graduate students spent many long hours with their attention glued to a screen made of zinc sulfide. They were looking for tiny flashes of light that were caused by alpha particles scattering off of atoms in a piece of gold foil, by measuring the scattering angle Rutherford hoped to figure out how atoms were structured. To Rutherford’s great surprise, they noticed that every now and again an alpha particle would bounce directly back from the foil – with what was known about atoms at the time this was as unexpected “as if you fired a 15” naval shell at a piece of tissue paper and it bounced back.” (https://cerncourier.com/a/rutherford-transmutation-and-the-proton/)

So by the time WWI rolled around, radioluminescence was well-known to scientists, the public, and to any number of manufacturers and their customers. The problem is that the people making these things (and those buying them) didn’t know that there were dangers.

One of the things, of course, was the minor factor that these self-luminous products were radioactive. And – yes – they knew that radium was radioactive, but a century ago they didn’t know that radiation caused cancer, or how much radioactivity it took to give someone radiation sickness. In fact, so little was known about the effects of ingested radioactivity that people were prescribed medicines that contained radium that they’d drink for their “health” – to enhance their libido, for example. It wasn’t until an industrialist and amateur golfer by the name of Eben Byers (https://www.cultofweird.com/medical/eben-byers-radithor-poisoning/) died as a result of taking a radium-based patent medicine that the public began taking this sort of thing seriously; the deaths of the radium watch-dial painters (https://www.atomicheritage.org/history/radium-girls) added to the public’s concerns about radiation and radioactivity. The fact that it was younger girls – chosen because of their steadier hands and attention to detail – who were getting sick and (in some cases) dying made for a tragic story that captured the public’s attention.

So…radioluminescence can be a good thing – making it possible to read a watch or instrument dials or to remain in marching formation in the dark. But it can be bad as well – as attested to by the Radium Girls. Because in the days before automation all of those watch dials were painted by hand, and the great majority of those hands belonged to the young women who were employed in hand-painting watches, aircraft instruments, compasses, and the like.

Young women were chosen for this role because of their steady hands and attention to detail, and the ladies did a great job, as anybody who’s owned one of their watches or other instruments can attest. But much of what they were painting was tiny and making it look good required a fine point on the brushes. To get that fine point, the ladies would “point” the brushes – rolling the tip of the brush quickly on their tongue. In doing so, they ingested a small amount of radium each time and, over the weeks and months that radium became deadly. There are accounts of some of these ladies having so much radium in their bodies that they could cause the luminescent paint to sparkle just by exhaling on it (due to the presence of radon, which forms from the decay of the radium). 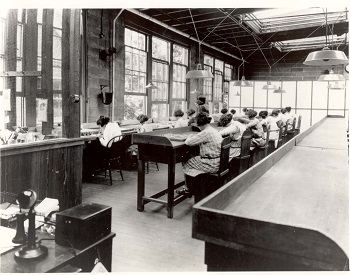 A photograph of the “radium girls” who worked at the U.S. Radium Corporation in Orange, New Jersey. This historical event was also recently popularized in the 2018 movie, Radium Girls, directed by Lydia Dean Pilcher and Ginny Mohler.

In the 1920s and 1930s, many of these women became ill and some died from various radiation-related illnesses. This, naturally, garnered media attention and eventually led to some regulatory changes – including contributing to the passage of laws regarding worker compensation for job-related illness and injury. Radium continued to be used for watches into the 1960s (later in some nations) before being phased out.

For the last few decades, the focus has shifted to cleaning up the sites where these watches and other self-luminous products were once made; in fact, I spent a few years managing aspects of a radium remediation in central Illinois. While much of the work was fairly routine, we did find a radium source inside the wall of one home, found some areas where contamination had spread further than expected, and even had to characterize the amount of radium paint used on a flag pole that was about 10 meters high. It was an interesting project; it was also neat to be working on a project that had such an interesting historical aspect.

Radioluminescence has an interesting history – but it’s also useful even today. In fact, I have a few examples in my radiation instrument case – in what are called scintillation detectors. One of my detectors, the one I use for measuring alpha radiation, uses a zinc sulfide crystal – the crystal emits photons of visible light each time it’s struck by an alpha particle. And sometimes when I’m performing an alpha survey it strikes me that the detector I’m using is based on the same principles as the scintillation screen used by Ernest Rutherford when he was teasing out the structure of the atom and the same principles as the phosphor that the Radium Girls were meticulously painting onto watch, compass, and instrument dials at such great cost to so many.