You are here: Home » Uncategorized » The Demon Core

On May 21, 1946 physicist Louis Slotin was conducting a dangerous experiment with a plutonium sphere – designed and constructed to the exacting standards required to achieve criticality and to explode with the force of tens of thousands of tons of TNT. The experiment Slotin was conducting involved bringing the two halves of the sphere close together – close enough for neutrons in one half to start to cause plutonium atoms in the other to start fissioning, but barely far enough apart to keep those fissions from increasing uncontrollably. To do this, Slotin had placed one hemisphere on top of the other, using a screwdriver to hold the two pieces a safe distance apart. To cause the fissions to start he’d move the screwdriver slightly to lower the top half ever so slightly, noting the increase in neutron levels; moving the screwdriver in the other direction increased the separation and shut the reaction down.

And then his hand slipped.

The top hemisphere moved too close to the bottom and everyone in the room saw a blue flash and felt a pulse of heat. Realizing what had happened, Slotin quickly used the screwdriver to flip the top hemisphere away from the bottom, stopping the reaction.

Slotin died nine days later, his estimated radiation exposure was well over the 1000 rem (10 Sv) that is invariably fatal. Of the other seven people in the room at the time of the accident, the highest radiation exposure was 182 rem and nobody else exceeded a dose of 62 rem. Two later died of cancer – both of different forms of leukemia – but their doses were low enough and the cancer appeared late enough (19 and 29 years after the accident) that it’s unlikely that radiation from this accident played a role in their illness. 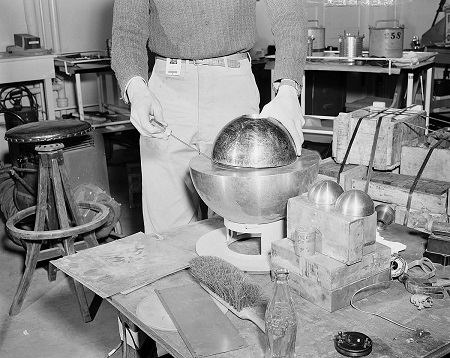 The thing is, this same plutonium core had killed before – in August, 1945. That time its victim had been a physicist name Haroutune (Harry) Daghlian.

While Daghlian was performing a different experiment than Slotin he, too, was working by hand, manually moving pieces of beryllium around the core to change the number of neutrons that were reflected off the beryllium atoms back into the plutonium. Like Slotin, Daghlian’s hand slipped, dropping a beryllium block onto the experiment and causing the core to become critical. Also like Slotin, Daghlian was able to disassemble the critical configuration, shutting down the reaction, and receiving a fatal dose of radiation in the process. Receiving a dose of about 310 rem (3.1 Sv), Daghlian died 25 days later.

I had known about the accidents and the deaths; I learned about them both in the 1990s during a class I took on nuclear criticality safety. But it turns out that the history of this particular core – re-nicknamed the “Demon Core” in the aftermath of Slotin’s death (its original nickname had been “Rufus”) – is far more interesting than this, and extends over a longer period of time.

Weighing a mere 14 pounds and measuring 3 ½ inches in diameter, this particular bit of plutonium had actually been manufactured in 1945 and it was originally intended to be placed in the third weapon to be dropped on Japan in the closing days of the Second World War – tentatively scheduled to be used on August 19, 1945…or on the first day after August 18 with good weather over the target area. As it was being prepared for shipment, Japan surrendered and it remained in the US, at the Los Alamos Laboratory site in New Mexico – the same site at which both Daghlian and Slotin worked.

In the aftermath of Slotin’s accident, the core received its nickname. But, more importantly, the lab also implemented a number of new safety measures that were intended to reduce the risk of such an accident occurring as well as moving the scientists far enough away to keep them safe even if a criticality did occur. The criticality safety training I attended in the mid-1990s was a continuation of these changes, as was a series of criticality safety inspections and audits I conducted at a uranium enrichment facility several years later.

But the history of the Demon Core didn’t end with Slotin’s death. As the US moved into the post-war years it realized that it needed to better understand the effects of these powerful new weapons; when the Soviet Union set off its first nuclear weapon in 1949 these tests gained a new urgency. One series of tests, dubbed Operation Crossroads, was planned for 1946 and was intended to learn about the impact of nuclear weapons on naval ships – the Demon Core was to be shipped to a balmy tropical island where it would be placed into a nuclear weapon and detonated.

The second accident put an end to that plan. The reason for this is that, when plutonium and uranium fission they split roughly in half, and the two fission fragments that are formed are radioactive. Not only that, but some of these fission fragments absorb neutrons quite efficiently – in these early days of nuclear weapons design and fission research, nobody was quite sure if these fission products and “poisons” would affect the test explosions. Why, the thinking went, use an uncertain weapon core when they could use a new one with no such issues instead? So instead of a working vacation on a tropical island, the Demon Core remained locked up in New Mexico.

Unable to be used in Operation Crossroads, the Demon Core (or, if you prefer, Rufus) was eventually melted down and mixed in with other plutonium, eventually ending up in a number of nuclear weapons cores in the nation’s nascent, but growing, nuclear stockpile.

https://web.archive.org/web/20160524122659/ https://www.newyorker.com/tech/annals-of-technology/demon-core-the-strange-death-of-louis-slotin
This entry was posted in Uncategorized. Bookmark the permalink.