You are here: Home » Uncategorized » The Radiation Propeller

When I was in the Navy, at one point I got to stand watch for four hours every day for nearly 2 months – I happened to be sitting directly in front of a cabinet that was marked with the radiation symbol (or, as we called it, the radiation propeller) which meant that I got to spend four hours every day staring at the sign. Three magenta blades and a magenta dot in the center, all on a yellow background – thanks to our training I could tell you the size of the blades, the size of the dot in the middle, and the spacing of the “propeller” blades, I knew that this was all specified by regulations, but I didn’t have a clue as to who chose this particular color scheme or why they decided to go with the three-bladed design. And, yeah, I know that in the giant overall scheme of things this isn’t that big a deal – but when you’re staring at this thing for a half shift every day for two months one just starts to wonder about that sort of thing.

Later I was able to find out where the radiation symbol was described in the regulations (in case you’re wondering it’s in 10 CFR 20.1901 https://www.nrc.gov/reading-rm/doc-collections/cfr/part020/part020-1901.html), but not much more than that. I was starting to resign myself to the possibility I might go to my grave without ever learning the origin of the radiation symbol…I pretty much decided that I’d be OK with that. So imagine my surprise when, sometime in the 1990s, I stumbled across a paper in the scientific journal Health Physics entitled “A Brief History of a 20th Century Danger Sign” by Stephens and Barrett that appeared in Health Physics Vol. 36 (May) pp. 565-571, describing where the design came from. While I can’t say that this made my life complete, it was sort of neat!

Without getting into all the nitty-gritty detail, I thought it was interesting to read that the design was (somehow) supposed to represent energy radiating out from a radioactive source. More importantly, it was also interesting to find out that there’s more to the radiation symbol than the propeller shape – if it doesn’t have a yellow background and a black or magenta symbol then it’s not compliant with the regulations and it doesn’t “count.” But instead of retracing the history of the symbol, let me instead tell you a few stories about people getting it wrong. 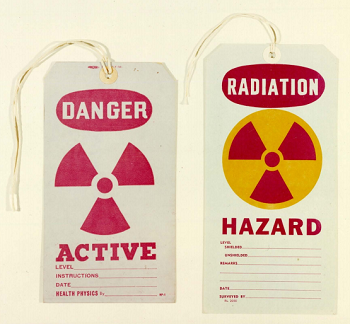 At one university I worked at in the early 1990s I was walking down a corridor and saw a radiation sign on the door to a lab that I knew didn’t use radioactivity. When I asked, I found out that that particular lab had lost a lot of analytical balances – they were stolen by drug dealers – so they started putting a radiation sign on the door. Drug dealers didn’t want to break into the labs because they were scared of the radiation they thought was there so they stopped stealing equipment. The only problem was that it wasn’t quite legal – we were cited for misuse of the radiation symbol. A few years later, when I was working as a regulator, we cited an environmental consulting company for the same thing – they were hanging radiation symbols on their equipment trailers when they had to leave them overnight in a location, again to discourage theft. Good in theory – expensive in practice (at least for the environmental consulting firm – they were fined).

Several years later I was working at a different university and we were putting up a new research building. I went to a meeting that included our interior designers and they were eager to show me their idea for a less-garish radiation sign – apparently, the yellow-and-magenta clashed with their color scheme. I agree with them that pastel green-and-cream looked much nicer, but then had to break the news to them that no matter how nice it looked, wasn’t legal. They ignored me and put up the more soothing signs all over the new building. And they were disappointed when they came back to do a walkthrough as the building began to fill with labs, seeing that their tasteful and subdued color scheme was ruined by the garish (but regulatorily compliant) signs. But I do have to admit that their signs were a lot nicer than the legal ones….

Around this same time, I was going through some of the old records at my university and I found some old radioactive materials tags – apparently ones that pre-dated the official colors. These had a green background and a red radiation propeller. I’m guessing that these dated back to the mid or late 1940s when the university had done a lot of research on radiation health effects as part of the Manhattan Project. I was tempted to use these in the new building…but we really did have to follow the regs. So I just put them in a folder instead (well…except for a few I kept for myself). 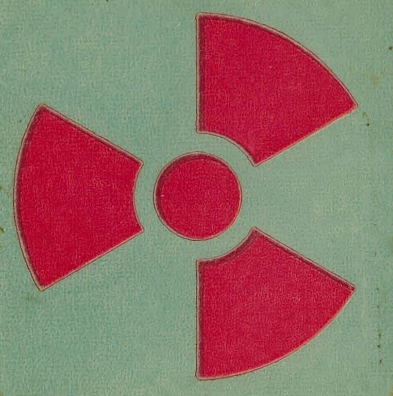 Coming back to my time in the Navy, I remember one day that I was sitting at my watch station, bored out of my mind and staring at the radiation sign. I let my eyes unfocus and was just staring at the dot in the center of the symbol, letting my mind go sort-of blank. And I noticed that one of the blades on the propeller was starting to dissolve and vanish. The only thing I could figure was that it was at the edge of my blind spot. So I shifted my gaze a little and the blade returned, but the next blade began to dissolve into my blind spot. Then I did it again with the third blade. At the end of the watch, I mentioned this to one of the other mechanics with who I shared the watch. His reply? “You too, huh?” It’s probably the most fun I’ve had with the radiation symbol.